1807 CENSUS OF ITHACA, KALAMOS AND KASTOS
by Ioanna Athanasopoulou 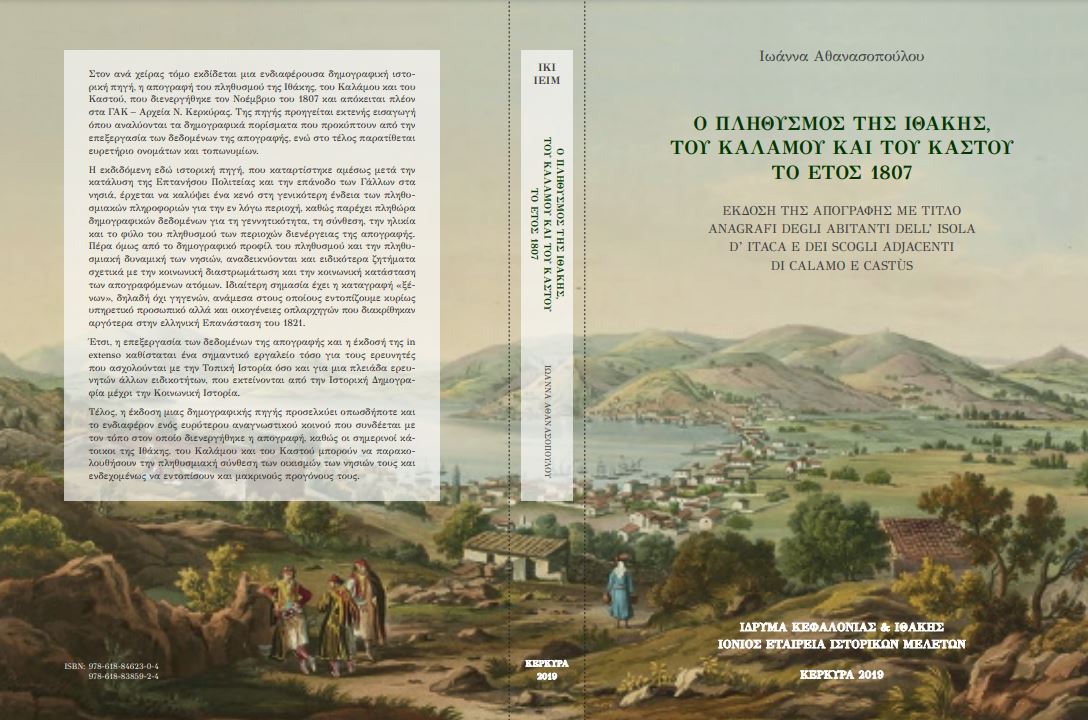 The 1807 census of the islands Ithaca, Kalamos, and Kastos, was collected immediately after the fall of the Septinsular Republic. A study of the census not only describes demographic trends in the island populations, but reveals the ways society was composed and stratified at the time when French rule returned to the Ionian islands. Of particular significance is the record of foreign-born residents, mainly composed of the domestic servant class, but also of the families of fighters who later took up arms in the Greek revolution of 1821.

Dr Ioanna Athanasopoulou’s publication of the 1807 census features an extended introduction which considers the demographic insights in the data and describes the context of the census’s collection. An index of names and place-names will be of particular interest for population studies, but also of great value to genealogists and local historians. 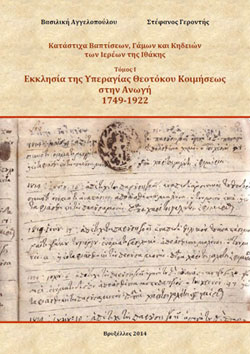 'Priests' books of baptisms, marriages and funerals in Ithaca Volume I Church of the Assumption of the Holy Virgin Mary in Anoghi. 1749-1922
by Vasiliki Angelopoulou and Stefanos Gerontis
This bilingual publication contains details of baptisms, marriages and funerals in the village of Anoghi, Ithaki from 1749-1922.
Download a digital copy here.
The publication provides an analytic description of the priests’ books (Katastiha) including an explanation of differences in the recording of details during the years covered, and a chronological catalogue in both Greek and English containing over 3,500 entries of the baptisms, marriages and funerals conducted in Anogi from 1749-1922 obtained from the Ithacan Historical Archive of the General State Archives in Vathi. The English translation commences on pages 126-204).
Contact the authors with any question you may have at This email address is being protected from spambots. You need JavaScript enabled to view it.

TROVE   https://trove.nla.gov.au/
Trove is a collaboration between the National Library and a host of organisations, communities and individuals. With more than 6 billion digital entries it is a treasure trove of artefacts, curiosities and stories from Australia’s cultural, community and research institutions.

With more than 40 million items, the collection mainly includes Australian Government records from Federation in 1901 to the present. Shipping records, immigration, naturalisation and military are just some of the records held.

For family history research, a geat starting place is the ‘Getting started with your research page’

You can search our historical indexes of births, baptisms, marriages, burials and deaths dating back to as early as 1836.

PUBLIC RECORDS OFFICE VICTORIA https://prov.vic.gov.au/
Holds an array of records created by the Victorian Government from the mid-1830s to now. For family history research, go to the ‘Family History’ page.
STATE LIBRARY VICTORIA
Copies of past editions of the IPS newsletter 'Odysseus' dating back to 1973
https://www.slv.vic.gov.au/search-discover/family-history-tools-resources - Family history tools and resources

https://guides.slv.vic.gov.au/multiculturalancestors - A guide to researching ancestors who emigrated to Australia from countries other than the United KingdomSands & McDougall’s directories   A key resource for researching the history of Melbourne and Victorian properties, residents, businesses and streets.