Join us at Ithaca House on 17 July 2016 at 2.00pm to view highlights from the Centenary Opening CELEBRATING OUR FOUNDERS

and to celebrate on the very day THE PANYGIRI of AGHIA MARINA, the patron saint of EXOGHI and the birthplace of A J J Lucas

Bookings are essential: RSVP Helen Vlass  on 9857 6716 or email This email address is being protected from spambots. You need JavaScript enabled to view it.

The documentary will be shown on the Society’s newly installed projector screen. 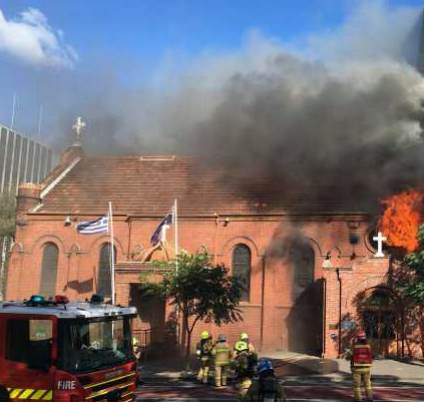 Victoria’s first Orthodox Church, Evangelismos, was severely damaged in a fire, which also destroyed priceless icons dating back to the 1800s.

The heritage-listed church in East Melbourne became engulfed in flames at approximately 1pm, Monday 2 May, shortly after a morning liturgy was held to celebrate the holy day of Saint George, and just a day after Greek Orthodox Easter celebrations.

“Luckily no one was inside the church at the time of the fire and the MFB was able to gain control of the blaze within half hour,” said Greek Community President Bill Papastergiadis.

“This is an iconic church not only for Greek-Australians but all Orthodox people. Planning for the church’s restoration will begin as soon as the police and the MFB finish their investigation and a full account has been taken of the damage,”Mr Papastergiadis said. "The cause of the fire has not yet been determined. It is estimated to have caused more than $500,000 in damage, although it will take some time to ascertain a more accurate figure."

Built by the Greek Orthodox Community of Melbourne & Victoria, Evangelismos was constructed in 1900-2 to serve Greeks, Syrians and other nationalities of the Orthodox faith. A J J Lucas,  our founding president was also one of three Church Committee members who played an integral role in the creation of Victoria's first Greek Orthodox Church.

Due to the recent fire at the Evangelismos Greek Orthodox church, the annual Eptanesian event, celebrating the unification of the Ionion Islands with Greece in 1864, will now take place in the presence of Mrs Christina Simantiraki, the Consul General of the Hellenic Republic in Victoria, at the “Axion Estin”  monastery complex , situated at 7 Hartington Street, Northcote, on Sunday 22nd May 2016 at 10am.

Light refreshments will be served after the church service, on site in the monastery hall.

There is ample car parking on site. 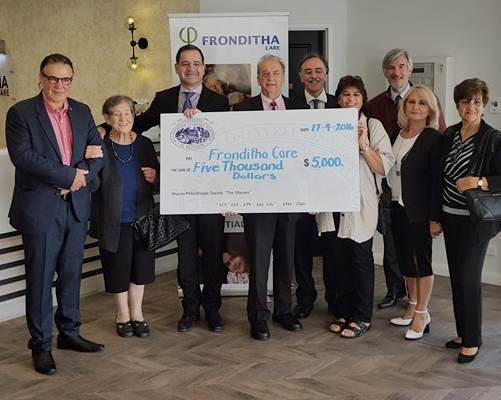 On Sunday 17 April 2016, members of the IPS attended the Open Day of ‘Steyi’, the new Fronditha Care residential aged care facility at Clayton.  They were taken on a tour of the facility and were left in awe of the amazing state of the art amenities.

The completion of ‘Steyi’ is the first of a three stage 20 million dollar rebuild of Fronditha Care Clayton. The new facility boasts light-filled open spaces, comfortable lounge areas, inviting dining rooms, a softly furnished library, large bedrooms with private ensuites, balconies, a hairdressing salon, a large chapel and more.  ‘Steyi’ is also unique in that it has a wing that will specialise in the care of Multiple Sclerosis sufferers.

The Society has had a long association with Fronditha Care which is Victoria’s largest provider of culturally and linguistically diverse aged care to those of Greek heritage. We have provided financial support over the years and this, our Centenary year, is no exception with the Society pledging $5000 to Fronditha’s 2016 3XY Radiothon. We know first-hand of the high quality care provided to our own members who have needed Fronditha’s assistance.

Community support is vital for the future of Fronditha Care. You too can support the Radiothon and help the elderly in our community. Details of the Radiothon are:

Below are some interior and exterior shots of the impressively built and designed Fronditha Care: 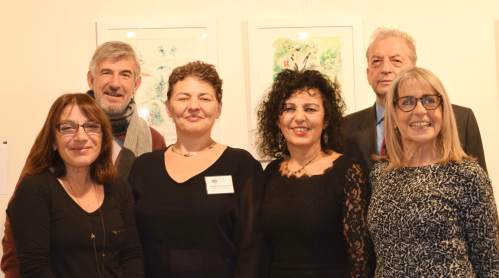 On Sunday 29 May, acclaimed novelist Arnold Zable opened the Centenary Art Exhibition at Steps Gallery in Carlton in front of 150 people.

The Art Exhibition was an opportunity for the many talented artists in our community to make an artistic contribution during this special milestone year for our Society.

The artists were given a theme to inspire them: ‘ODYSSEY – AN ARTIST’S JOURNEY’ which explores life’s journey and those experiences that shape us both individually and collectively. The artists, all of whom have a connection with our beautiful island of Ithaca, captured the theme imaginatively and evocatively.

We thank each of them for their wonderful contribution.

Our special thanks to the Centenary Art Exhibition Committee, Kathy Vlassopoulos, Georgia Vlassopoulos and Tina Dellas, who worked enthusiastically over three years to mount this exhibition.

The Centenary Art Exhibition will close on June 12.

For images from the Art Exhibition opening, visit our Photo Gallery.

For all of you fluent in Greek, read what Neos Kosmos had to say about the opening. 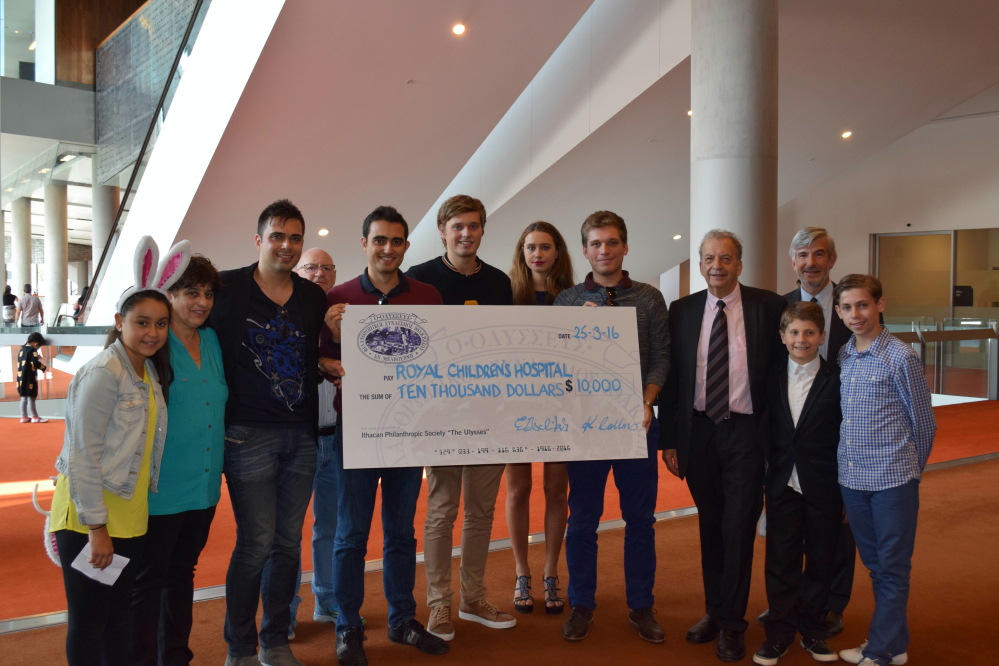 The Society’s recent Good Friday Appeal Fundraiser was well supported on the day with approximately $6,000 raised through door sales, donations, the raffle and rovani sales. Ioakim and Marina Megalogenis and Vaggelio Pastras provided the much sought after rovani for sale and over 30 prizes were donated for the raffle. The Society made up the balance and delivered a $10,000 cheque to RCH appeal headquarters at the Melbourne Exhibition Centre where the cheque was presented on live TV. An additional $1,306.20 was raised in the tin collection at the Annual Picnic and $430 worth of cheques were sent directly to the RCH. All in all, a grand total of $11,736.20.