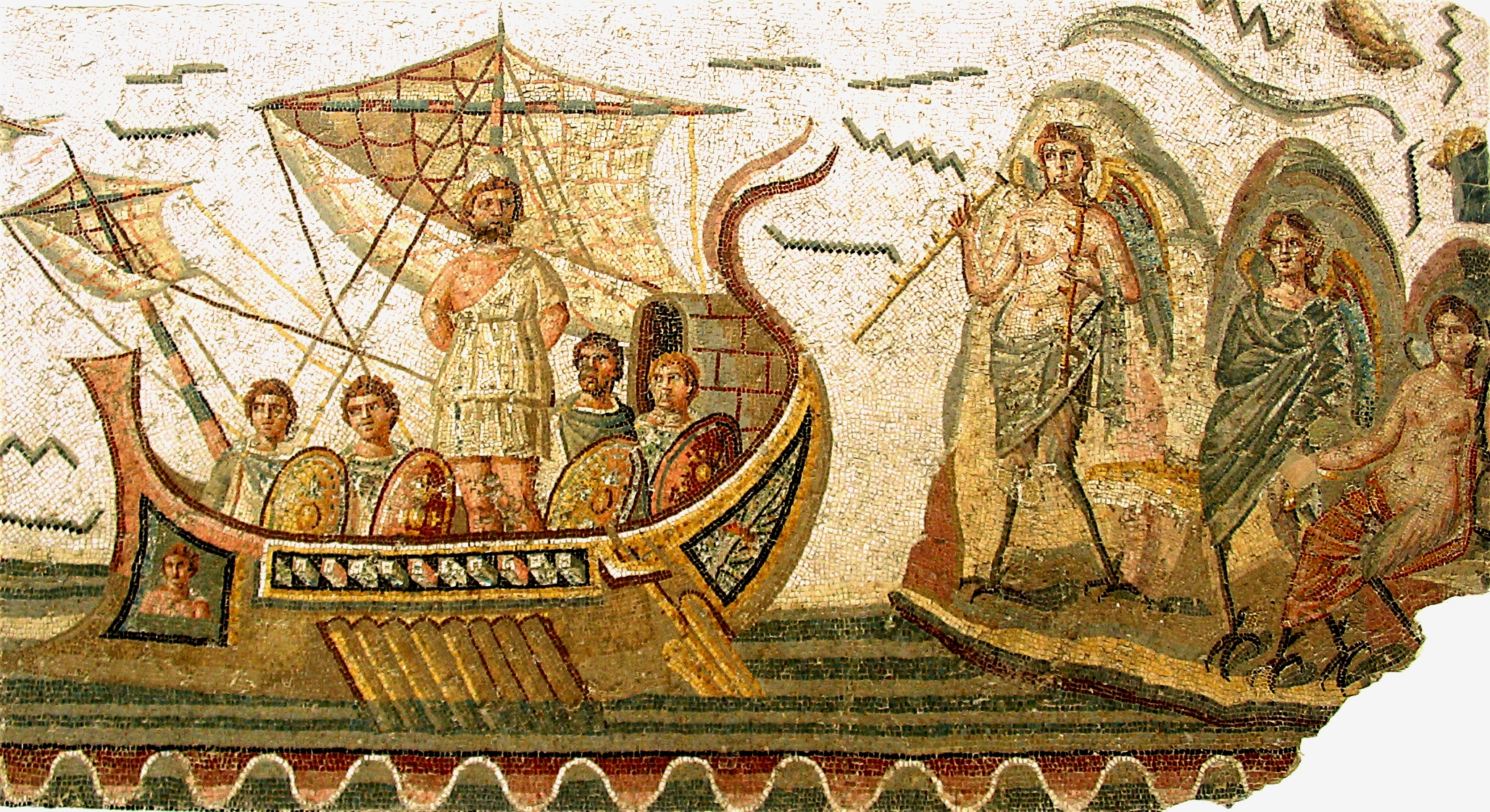 Homer’s Odyssey is one of the most renowned literary works from Greek antiquity. It is an epic poem that tells of the return journey of Odysseus to his homeland of Ithaca following the Trojan war which lasted for ten years. Odysseus spent a further ten years trying to getting home, battling mystical creatures and facing the wrath of the Gods.

Some of the themes explored by The Odyssey are those of homecoming, hubris, vengeance, the gods, fate, the power of the mind over physical strength, and loyalty.

KEY EVENTS IN ODYSSEUS' EPIC JOURNEY BACK TO ITHACA

Odysseus and his men attack the Cicons.

Odysseus and his men reach the island of the Lotus Eaters.

Odysseus loses all bar one of his ships to the Laestrygonians

Circe turns half of Odysseus’ crew into pigs

Journey to the Underworld

Odysseus and his men encounter the Sirens

Passinv by Scylla and Charybdis

Odysseus is captured by Calypso 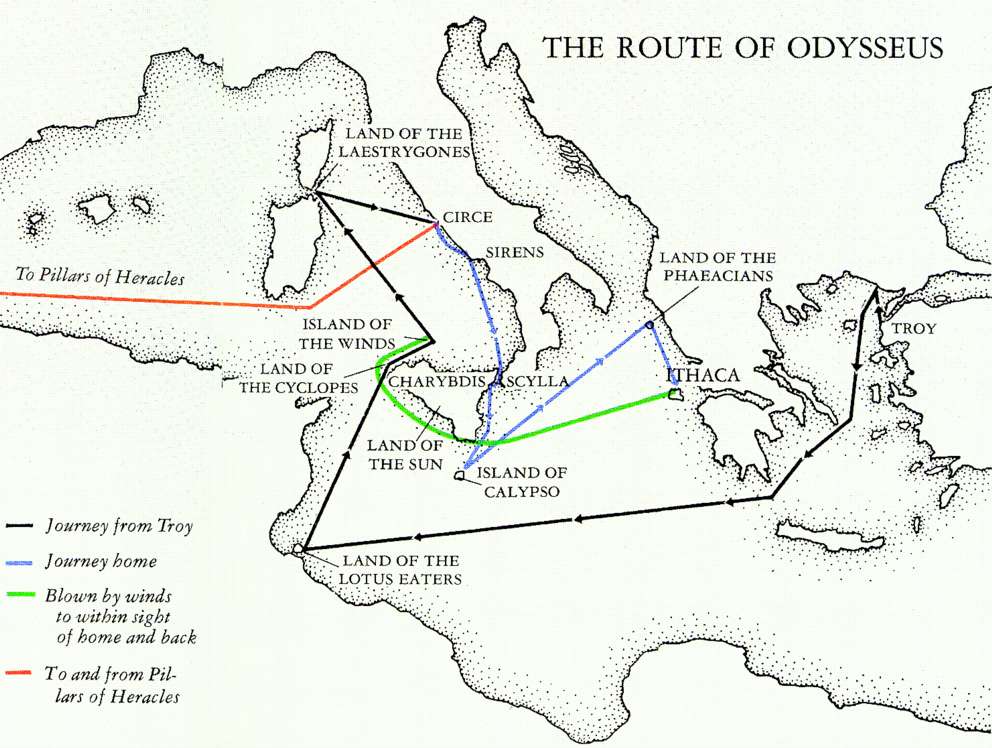 Aegyptius - One of the chieftains of Ithaca who speaks at the Assembly in Book II.

Aeolus - A mortal whom Zeus has appointed keeper of the winds.

Agamemnon - The king of Mycenae and leader of the Achaean expedition to Troy.

Alcinous - The king of the Phaeacians, husband of Arete and father of Nausicaa, he is a generous, kind, and good-humored ruler and father.

Antinous - The leader of the suitors and the first slain by Odysseus. He is a cruel, greedy, and hypocritical villain, always attempting to justify his evil behavior by distorting the motives or acts of others.

Anticleia - The mother of Odysseus. She encounters him in Hades while he is there.

Arete - The queen of the Phaeacians, wife of Alcinous and mother of Nausicaan.

Argus - The old hunting dog of Odysseus who recognizes his master and dies.

Athene - Daughter of Zeus, goddess of wisdom and patroness of the arts and crafts, also known as Pallas. Odysseus is her favorite and protege.

Calypso - The sea nymph who keeps Odysseus captive for nine years and who, in hope of making him her husband, offers him immortality.

Circe - The enchantress who transforms the crew of Odysseus into swine and who, when she finds that she cannot conquer Odysseus, takes him as a lover and helps him with advice and supplies on his voyage home.

Demodocus - A blind bard entertains at the banquets in the palace of Alcinous.

Elepnor - A young seaman in the crew of Odysseus who dies in an accident on Circe island and whose spirit reproaches Odysseus in Hades.

Eumaeus - The chief swineherd of Odysseus, who remains faithful to his master during his long absence and who plays an active part in assisting Odysseus to regain his kingdom.

Eupeithes - The father of Antinous. He manifests the same rashness and disloyalty that is exhibited by his son when he leads a band of Ithacans to attack Odysseus but is quick to recognize his error and apologize.

Eurycleia - The faithful and devoted old nurse of Odysseus, recognizes him by the scar on his leg.

Eurylochus - One of Odysseus' officers; he is an unimaginative and sober person, who wisely avoids entering Circe's palace in Book X, but who also abets the sailors when they slaughter the cattle of Helios.

Eurymachus - The second most important suitor; he is as evil as Antinous, but far more soft and cowardly.

Helen - The wife of Menelaus, king of Sparta. She was the cause of the Trojan War.

Hermes - Son of Zeus, the ambassador of the gods, conductor of the dead souls to Hades, and patron of travelers, merchants, and thieves.

Hyperion - The god of the sun. Also known as Helios. It is his cattle which is eaten by Odysseus' crew.

Irus - A cowardly bully who is a beggar on Ithaca and a favorite of many of the suitors.

Laertes - The old father of Odysseus, who lives in isolation from the demands of public life, on a small farm in the back hills of Ithaca. He remains alert and agile, despite his age.

Leucothoie - A sea nymph who helps Odysseus read the island of the Phaeacians during the storm in Book V.

Melantho - One of the serving maids in the palace of Odysseus; she is a nasty and impudent young girl and is disloyal to her master, having become the mistress of Eurymachus.

Melanthius - The chief goatherd of Odysseus. In his master's absence he has ignored his duty and has ingratiated himself with the suitors by catering to their whims.

Menelaus - King of Sparta, husband of Helen, and brother of Agamemnon. Like Odysseus, he too has a series of misadventures on his return home from Troy.

Mentor - A faithful friend of Odysseus who was left behind on Ithaca as Telemachus' tutor; he is wise, sober, and loyal.

Nausicaa - The daughter of Alcinous and Arete. She is a charming young maiden, in her adolescence.

Nestor - King of Pylos, father of Peisistratus. A very wise and garrulous old man, one of the few survivors of the Trojan War.

Odysseus - King of Ithaca, husband of Penelope, father of Telemachus, son of Laertes. He is the first of the Greek epic heroes to be renowned for his brain as well as his brawn.

Peisistratus - The gallant young son of Nestor. He is the companion of Telemachus on his journey through the Peloponnesus.

Penelope - The wife of Odysseus. She is serious and industrious, a perfect wife and mother in many aspects.

Philoetius - The chief cowherd of Odysseus; he is brave and loyal and, despite his age, stands besides his master during the battle with the suitors.

Polyphemus - A one-eyed Cyclops who held Odysseus and his men captive in his cave until he was made drunk and blinded by Odysseus.

Poseidon - Younger brother of Zeus, god of the sea and earthquakes, father of Polyphemus. Because Odysseus is a sailor and must travel home by ship, Poseidon is able to do him much harm. Poseidon bears a grudge against Odysseus because of his rough treatment of Polyphemus.

Scylla - A sea monster with six heads whom Odysseus and his crew must pass during their voyage.

Sirens - Two beautiful maidens who dwell in a flowery meadow on an island somewhere between that of Circe and of Scylla. They tempt passing mariners to their deaths by their tantalizing songs.

Telemachus - The son of Odysseus and Penelope. He is just entering manhood and is very aware of his duty, and his father's reputation as a hero which he feels he must live up to.

Tiresias - The most famous of all Greek seers. The legend was that in compensation for his blindness the gods had given him his awesome visionary powers. His spirit is consulted by Odysseus in Hades.

Zeus - The supreme god and king of Olympus. He is officially neutral in human affairs; his duty is to carry out the will of Destiny, but he is often sympathetic towards humans.

Aeaea - The island home of the enchantress Circe.

Aeolia - A floating island home of Aeolus, king of the winds.

Capri - Island home of the Sirens.

Cicones - A Thracian tribe whose capital was raided by Odysseus and his men after leaving Troy.

Hades - The land of the dead. Also known as Tartarus or Klysium.

Ithaca - The island kingdom of Odysseus. Off the west coast of mainland Greece.

Ismaurus - The capital of the Cicones, located in Thrace, to the north- east of Greece.

Laestrygonians - A tribe of cannibal barbarians who seriously defeat Odysseus and his men when the Greek ships land in their country.

Ogygia - Island home of the nymph Calypso. Thought to be modern day Malta.

Olympus - A mountain in Greece, which is home to many of the gods and goddesses.

Phaeacians - The inhabitants of the land of Scheria.

Pylos - The kingdom of Nestor, located on the Peloponnesian Peninsula.

Scheria - The island home of the Phaeacians, and the kingdom of Alcinous. Also may be referred to as Drepane.

Sparta - The kingdom of Menelaus, located on the Peloponnesian Peninsula.

Troy - A kingdom that was destroyed by the Greeks in the Trojan War. It is located on the western coast of Asia Minor.

Thrinacia - Island home to the cattle of the sun god, Helios.